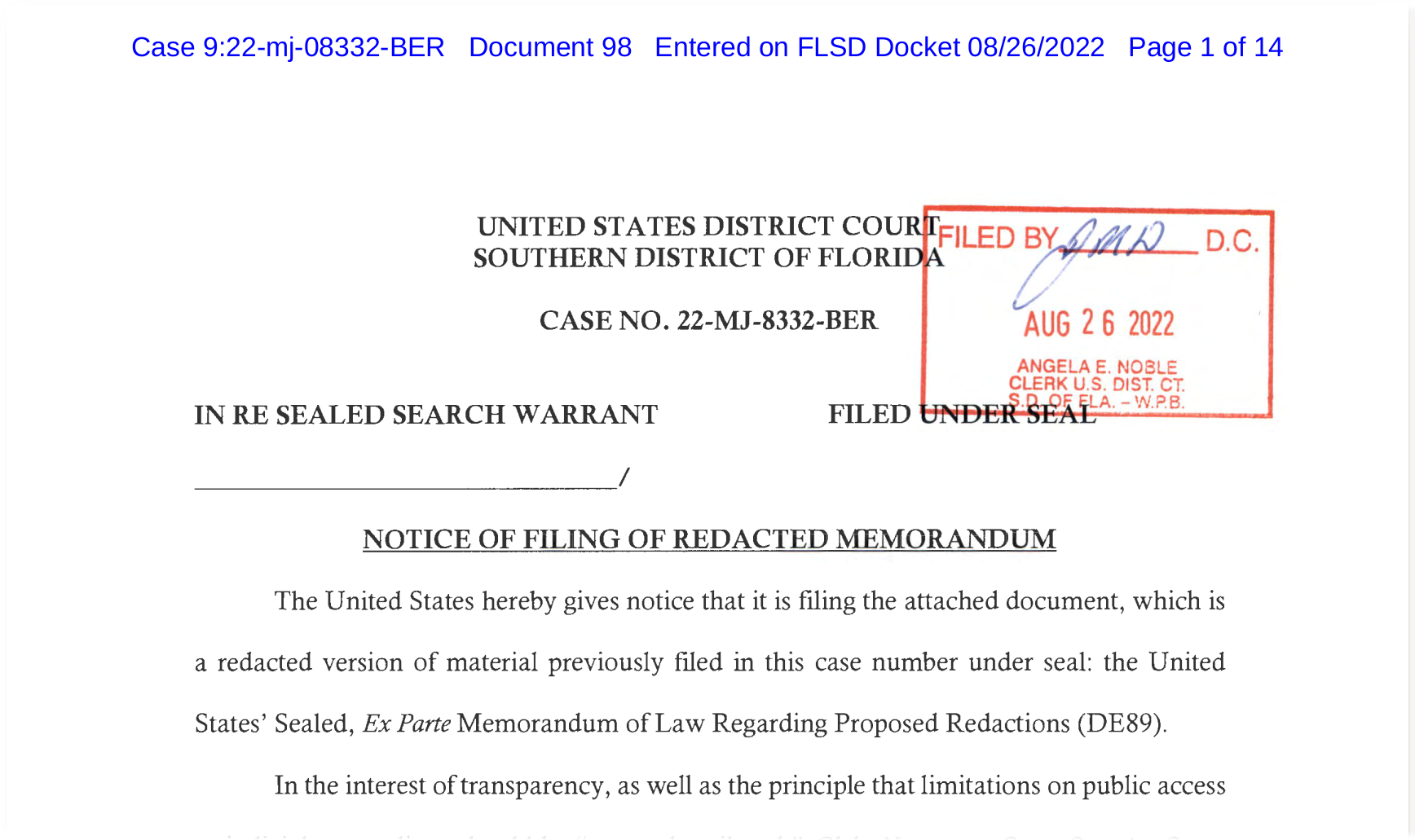 The Memorandum is here.

The Affidavit is here.

The DOJ Filing is here.

The Trump response to DOJ is here.

Trump has not abandoned the lies and mayhem-centric approach to getting what he wants, regardless of what it costs the country or his followers. This is because his behavior and responses are driven not by his decision making so much as the pathology of his narcissism.

Narcissists do not change. And if you are trusting that Donald Trump will eventually change and get better, you are not an admirer or friend or even a follower of his, you’re a victim of his.

Some use the term ‘malignant narcissist’. He is dangerous to the people around him whom are almost never aware of his inability to care, his willingness to say absolutely anything in order to avoid blame and shame for his actions. And his deep irrational concern over what you think of him, and the lengths he is willing to go in order to maintain for himself a sense of his superiority in your eyes and in his own head. Narcissists are complex.

His primary focus in life is the avoidance of feelings of shame. He cannot process those feeling normally, and it is this that is at the core of malignant narcissism, at the center of what drives his most dangerous behaviors. This is a characteristic of every narcissist. The inability to process shame in normal healthy ways.

Trump envies. Envies Putin for example, and has even publicly expressed his envy, and he envies others as well. He assumes that you and everyone else envies him.

He perceives himself as superior and believes that he should be treated as such and should only interact with other ‘special’ people like himself.

If Donald Trump gets the sense that his superiority is being threatened by someone, whether that threat is real or an imagined threat, Donald Trump will immediately begin to degrade and devalue that person.

As President he did this verbally publicly repeatedly to almost everyone in a position of responsibility that exercised their responsibilities in his presence in public, where the exercise of such may have left Donald Trump looking less knowledgeable thus less superior than that person.

The person was afterward publicly attacked, degraded and devalued. In every single case.

At White House press briefings where he was present. It was typical of Donald Trump to repeatedly interrupt the speaker to interject whatever he though needed to be said in that instant, as if the person speaking wasn't doing a good enough job. He always ended up saying something stupid, having taken the stage with some knowledgeable expert. He always ended up looking like a fool, because he does not in fact know, but felt he needed so say something so he could appear that he did know. Desperate to have you think that he did know. So that he would have the comfort of knowing that you believed he knew more than the other person at the podium.

How many times has he told industry professionals, engineers, scientists, medical professionals that, "that’s not so hard, I could do that" in front of the public. Even offering recommendations for solutions on several occasions. Which in most cases left him looking like an idiot. He is his own worse enemy in that. But he is powerless to stop it.

Driven. He’s not making decisions about doing things, he is reacting to the emotion of fear. The fear that from his view he might be perceived as being inferior to those speaking to the public. And interestingly, his primary target for convincing with these frantic efforts at addressing his perceived challenges to his superiority was himself. Narcissists are insecure and fearful. That also is what makes them so dangerous. They are driven by fear and the avoidance of shame.

And they will do this at any cost and by any means..

Further a narcissist does not view the ‘truth’ normally. For them the truth is whatever serves to keep them free of shame or blame. This includes saying what it takes to convince you that he is the victim and therefore cannot logically be blamed. A narcissist will always blame others. And when accused of doing what they are doing, will blame you and accuse you of victimizing them.

This makes Donald Trump the absolute perfect poster child for the White Nationalists whose rhetoric nearly always seeks to paint themselves as the victim.

He has no ability to recognize the harm that he does to others. He simply lacks the ability to understand how you are impacted, how you feel. A narcissist lacks empathy. Period. They are incapable of putting themselves in your place.

Narcissists flourish in mayhem and work to create chaos, expertly without being seen as being to blame; because out of mayhem he can (and will) twist and craft a tale of what the truth is that will leave him blame and shame free and leave his observers clueless as to what has just happened.

A narcissist is a person that cannot process shame in normal ways. That is what is at the core of all of Donald J. Trumps dysfunctional behavior. He is a true narcissist, a malignant narcissist.

And that is why Donald Trump does what Donald Trump does and has done and will do. And he will continue to do it because he cannot change. Narcissists are incapable of looking at themselves as normal people might from time to time do; recognizing shortcomings, admit wrongs and moving to correct them.

This in an abbreviated draft version of why Donald J. Trump is so incredibly dangerous in any role of leadership anywhere, and especially as the leader of a Country. And especially my country.

DSM-5 which contains the criterion for identifying Narcissistic Personality Disorder in individuals is lightly referenced in my observations and writing. NPD is rare and occurs in less that two percent of the population (2%).